Stalking the Wind Surfer in Port A by Jann Alexander ©2014

Capturing the ups and downs of a lone wind surfer in the distance is a job for a long lens, and that wasn’t in the camera bag I had with me. In fact, I had no camera bag with me at all; the glorious autumn beachfront, deserted, lay before us—and I had a dog who’d never once laid paws upon sand nor danced in waves. Our eyes were all on the late-day Port A beachfront.

What I did have was my iPhone 5s, not in my camera bag, but in my pocket, where it pretty much lives whenever there’s any photo opp potential whatsoever. (The camera bag, with its long lens and zoom lens and other tricks, was back in the car, of course.) Naturally, as I looked towards the far-off jetty, a wind surfer caught my eye. Was it attracting my dog’s attention, too?

Port Aransas, as it is officially noted on Texas maps and at the Port A Chamber of Commerce, has many attractions and genuine can’t-stop-shooting photo opps (more on that in an upcoming piece). But its windsurfers, as it turns out, attract iPhoneographers more than they attract their canine companions—who are much more keen on sniffing out what’s in the omnipresent beach seaweed. 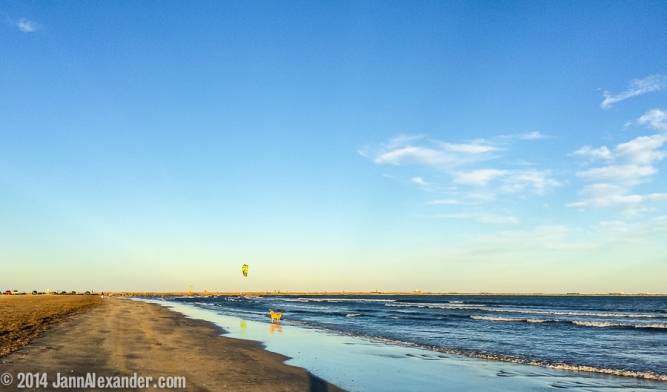 Wind Surfing in Port A by Jann Alexander ©2014

Still, I was intent upon capturing the wind surfer. If he was willing to ascend, roil with the surf, slam down in descent, and continue this muscular watery workout, it was my obligation to record it. You could do this too, for any action shot, with your iPhone. It’s up to the task when you employ a little-noticed pro feature built right in.

Using the zoom feature on your iPhone, you may have noticed, results in noisier, grainier images (that means crappier, for lay folk), so the challenge of photographing an action sequence in the far distance is very real. But using a few key tricks increases the odds that the results will be photographs you’re proud to share (at least I am):

When shooting in the Burst mode, the odds of getting a useable action photograph increase. It’s just like using Autodrive (or the Continuous shooting mode) that the pros use on their DSLRs. You hold down the iPhone’s Photo button and until you let it up, you’ll be shooting pictures faster than you can count. It also makes a great sound. Try it now.

Later when you’re reviewing your photos, you’ll see some of them are labeled Burst (9 photos), or another number, at the top left corner of the first photo. The number reported there varies with the number you made. You’ll also see that Select appears in the bottom of your iPhone, between Edit and Favorite. Just tap the Select text to see them, and to choose one (or more) to edit and save or share. 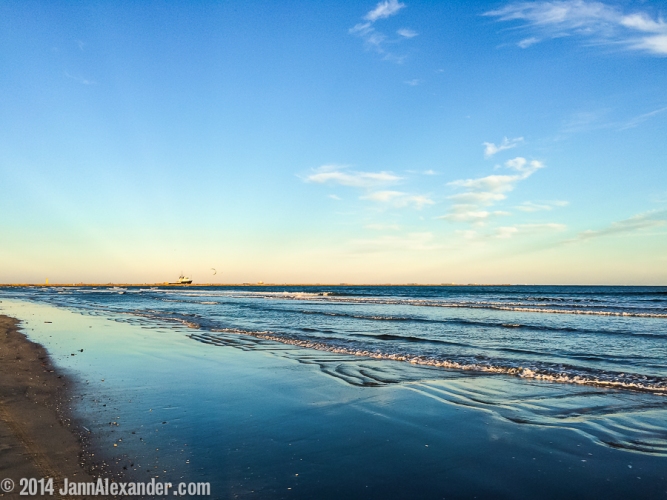 Heading Out by Jann Alexander ©2014

There’s one more pro tip for using your iPhone that we all need to learn, sometimes the hard way. It’s a great life hack, too, and it goes something like so:

You don’t have a fancy DSLR with you; you’ve got an iPhone. It’s great for a lot of things, and if you look around the beachfront, you’re likely to find some other photographs that will make you even more happy than the one you set out to get.

Just like dogs do. You take them to the beach to frolic in the waves, and instead, they chase birds and sniff seaweed. There’s a lesson here for their humans. ♣

What kind of results have you been getting with Burst and HDR modes?

Find more iPhoneography tricks and photos HERE.  See more creative ways others are using their smartphones at Sally’s Lens and Pens Nature challenge, where each week is a new smartphone photo adventure. And please get in touch HERE to buy my custom prints, from $45.